A laser level is one of those tools that once you use it you wonder how you ever got by without it. They can be broken up into three different types: plumb or dot lasers, line laser levels, and rotary lasers.

Plumb or dot lasers project a dot onto a surface as a reference point, sort of like a laser plumb bob. These are the simplest and cheapest models, but help the least.

Line laser levels emit a beam in the form of a level line onto a wall or workspace. They are designed to fan out to the widest angle possible which tends to be about 160 degrees for a vertical line and about 130 degrees for a horizontal line, although there are units that exceed 180 degrees including up to a full 360 degrees. There are also dual-beam or three-beam lasers that emit horizontal and vertical lines to establish both plumb and level.

If two lines can intersect then you might see that model referred to as a cross-line laser level.

These models are best used indoors and in shorter distances. You can use them outside, but it will be extremely difficult to detect the laser in daylight.

Rotary laser levels are a special type of laser level that has a rotating head that when spinning emits a laser beam in a horizontal level line around an entire space or 360 degrees. Some can be laid on their side to project a vertical line or have slope adjustments to change the angle of the line.

They are larger and cost more money, but usually work better at longer distances. They are primarily used outside, but you will probably need a laser detector to help you because it is difficult to see the laser in daylight.

Below we review the best laser levels including line levels and rotary lasers. Below each section we include a comparison chart so you can easily compare one laser level versus another. 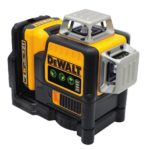 Find on Amazon
We selected the DeWalt DW089LG as the best laser level. However, it is on the expensive side at about $429. The reason for the high price is because it projects three 360 degree green lasers – 2 vertical and 1 horizontal. That makes it perfect to do full room layout without having to move the laser level.

Powered by a 12V li-ion battery, the DW089LG has a visible working range of 100 feet and a 165 feet range with laser detector all while being accurate to 1/8″ at 30 feet. In addition to the battery it comes with a charger, magnetic bracket with 1/4″ and 5/8″ thread, and green enhancement glasses all in a hard case.

While being an outstanding choice for professionals, you can save some money and avoid the DeWalt DW089LG if you do not need full 360 degree coverage or three beams. Potential buyers could also consider the red laser version for around $395 (comes with holder for 4 AA batteries instead of 12V).

Find on Amazon
The $529 Bosch GLL3-330CG is very similar to the DeWalt DW089LG with two big differences – the working distance and price. The GLL3-330CG uses a brighter green laser that provides a range of up to 200 feet, however the price point is $100 more than the DeWalt.

The Bosch GLL3-330CG projects three 360-degree lines, two vertically and one horizontally, with an accuracy of ±3/32 inch at 30 feet. It is powered by a 12v li-ion battery and can be controlled across the room on your smart phone using the Bosch app. It also comes with the BM1 Positioning Device for line lasers which is a versatile mounting device with microfine adjustments.

The red laser version, the Bosch GLL3-330C, is also available and is about $80 cheaper. 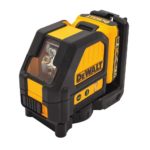 Find on Amazon
If you only need two lines, one horizontal and one vertical, and also want bright green lasers then we recommend the $339 DeWalt DW088LG laser line level.

The DW088LG projects green self-leveling horizontal and vertical cross lines that are four times brighter than red lasers. This enables easy visibility for indoor use with a working range of up to 100 feet and accuracy of 1/8″ at 30 feet. The unit has a built-in magnetic bracket and is powered by a 12V battery which is included along with a charger.

The only slight negative is the price. There are some cheaper options available including the $170 DeWalt DW088LR which is essentially the same laser level but with a red laser instead of green.

Overall we highly recommend the DeWalt DW088LG for any type of construction work indoors and even some outdoor work thanks to its bright, crisp green laser lines. 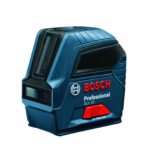 Find on Amazon
If you are looking for the best cheap cross-line laser level then you should consider the $129 Bosch GLL 55. It is one of the highest rated laser line levels on Amazon with a 4.6 star average.

The GLL 55 emits two self-leveling red beams that are not as bright as green lasers, but still give you a working range of up to 50 feet with an accuracy of up to 1/8″ at 33 feet. It comes with a magnetic L bracket in addition to 1/4″ and 5/8″ tripod mounts. It is powered by 3 AA batteries.

While not as bright as the more expensive green laser levels, the Bosch GLL 55 is a great choice for occasional users who don’t need to work with long distances. 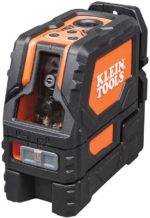 Find on Amazon
Another contendor for the best cheap line laser level is the Klein Tools 93LCLS which sells for about $133. This model emits two red beams, one vertically and one horizontally, with an accuracy of ±3/32 inch at 33 feet and a working distance of up to 65 feet.

The 93LCLS is powered by 3 AA batteries and has an integrated magnetic 360-degree mounting bracket with 1/4-Inch and 5/8-Inch tripod mounting threads. It also comes with an additional mounting clamp attachment for use on ceiling grid applications.

Overall the Klein Tools 93LCLS is a great choice for anyone in the DIY user level. 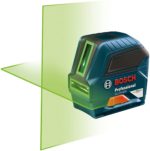 Find on Amazon
The cheapest green laser level on our list is the $219 Bosch GLL75-40G. It emits two green laser lines, one vertically at 270 degrees and one horizontally at 180 degrees. While that is not whole room, 360 degree coverage, you won’t have any issues with the beams covering the entire length of a wall.

The Bosch GLL75-40G is the perfect choice for anyone who wants two green cross laser lines, but doesn’t want to spend a lot of money on one. 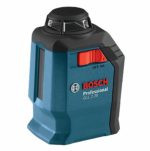 Powered by 4 AA batteries the Bosch GLL 2-20 has a visible working range of 65 feet with accuracy of 3/16″ at 30 feet. It comes with the BM3 mounting device, 1/4-20 inch thread for tripod, laser target, and carrying case.

You can save some money by looking at other models if you do not need 360 degree coverage, but for those of you who want a horizontal line that covers 3 or 4 walls then the Bosch GLL 2-20 is a great choice. 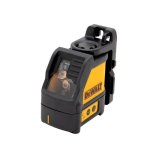 Find on Amazon
DeWalt’s red beam cross line laser is the $149 DeWalt DW088K. This slightly older unit is still one of the highest rated models on Amazon with a 4.6 star average rating.

It emits two bright red beams and self-levels. It is powered by 3 AA batteries.

The DeWalt DW088K is very comparable to the Bosch GLL 55, which we like better mainly becaue of the price which is about $20 cheaper.

Find on Amazon
We chose the Bosch GLL 30 as the best laser level under $100. Selling for around $70, the GLL 30 emits two red self-leveling beams – 1 vertical and 1 horizontal. Powered by 2 AA batteries it has a visible working range of 30 feet with accuracy of 5/16″ at 30 feet.

Overall the Bosch GLL 30 is not quite as bright or accurate as some more expensive models, but it is a perfect choice for a home owner who only has an occasional need for a laser line level. If you are a professional you should avoid the GLL 30 and step up to a better, more expensive model. 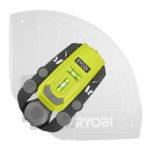 Find on HomeDepot.com
The cheapest line laser level to make our list is the Ryobi ELL1750 which sells for just under $30. It only emits one red beam that is not self-leveling with an accuracy of ±1/2 inch at 20 feet.

Powered by 2 AAA batteries the ELL1750 is a bit dim with a working range of only 20 feet.

Overall the Ryobi ELL1750 is definitely not for professionals, however it can be a useful tool for odd projects around the home like hanging pictures. Just remember it does not self level, so it can be a bit more difficult to set up and it is not very accurate either. 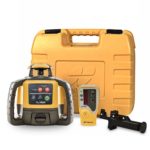 Find on Amazon
Our choice for the best rotary laser level is the Topcon RL-H5A which sells for $557 with a receiver, but not a full kit including a tripod or grade rod like some other units come with. Its slope matching feature works great for slope applications such as excavating, embankments, drainage, pipe laying, septic systems, sloped pads and fields. It can also be used as a flat laser for elevation settings, checking grade, footings, foundations, and concrete forms.

The Topcon RL-H5A is the most accurate rotary laser, within 1/16-inch at 100 feet, and has the longest range at 2600 feet of any model on our list. It is powered by 4 D batteries and has a 5 year warranty.

Overall the The RL-H5A excels at outdoor long range use for a variety of construction projects.

Find on Amazon
If you want a rotary laser level powered by a rechargeable li-ion battery then the 20v DeWalt DW079LRK is for you. It costs about $1279 which is the most expensive rotary laser on our list, but that does include a full kit with a tripod, grade rod, receiver, various adapters and mounting brackets, and enhancement glasses.

The DW079LRK has a working range of 2000 feet with an accuracy of 1/16-inch at 100 feet. It also has a dual axis slope mode and is powered by a 20v li-ion battery which is included with charger.

While it is expensive, the DeWalt DW079LRK is a quality red laser and probably the best out there that uses an existing battery platform. 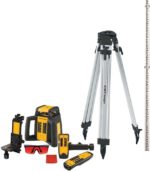 Find on Amazon
The $709 CST/Berger RL25HVCK is a solid choice for exterior use. It has a range of up to 2000 feet and is accurate to 3/32-inch at 100 feet. It features a self-leveling design and single axis slope control. It is powered by 3 D-cell Alkaline batteries which provide up to 85 hours of runtime. 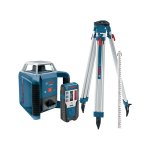 Find on Amazon
Another effective exterior rotary laser level is the Bosch GRL400HCK Exterior Self-Leveling Rotary Laser Complete Kit which you can find for about $629. That is a very decent price for what you get and makes a good choice for any DIYer or even a professional.

The GRL400HCK has a range of up to 1300 feet and is accurate to 3/32-inch at 100 feet. It is powered by 2 D cell batteries that provide up to 40 hours of life. The kit includes the laser detector, LR1 laser receiver and bracket, tripod, and 8 foot grade rod.

Find on Amazon
Our choice for the best cheap rotary laser level is the Johnson Level and Tool 40-6516 which is available for about $399. It is self-leveling in the horizontal plane and manual-leveling in the vertical plane. The indoor visible range is up to 200 feet and the outdoor range is up to 800 feet. It can provide 24 hours of use powered by AA batteries.

The Johnson 40-6516 is a good choice for anyone who needs a rotary laser for indoor and outdoor use, but is on a tight budget. There are also kits available that include a tripod or grade rod such as Johnson’s 40-6517 or 99-026K models.